In Xi’an in early November I had some trouble finding contacts or websites for any local equestrian establishments – several of the phone numbers I found were out of service – but eventually found a mobile number for Ren Ying Ming, the owner-manager of the Xi’an Sunshine Equestrian Club. And so early on a Sunday morning I hired a taxi to take me one hour’s drive outside the city proper to the mountain/parkland area where the city’s zoo is also located.

Mr Ren very helpfully drove to meet us and guide us to his club, which is probably the best located of any I’ve seen in China. While small in scale the Sunnytime (Yangguang Ma Shu to use the Chinese name) is at the foot of the Qin Ling mountain range which divides Northern and Southern China.

Ren keeps 20 well-cared-for horses – (all local breeds) – and aside from a small outdoors arena and a corral he has the use of a piece of land next door, at the foothills of the majestic Qin Ling. 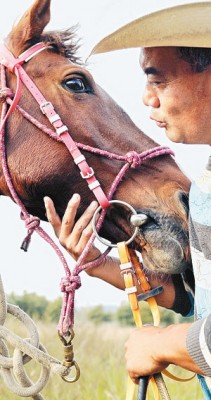 A 46 year old former IT worker, Ren rides English and Western style. He purchased some of his horses locally for an average EUR1,000 but spent EUR4,000 on a six year old gelding (mixed breeding, perhaps part Yili) shipped down from a polo club in Beijing.

There’s alas no website for the Yanguang/Sunnytime but Ren says he’s getting increasing interest from local parents taking their kids here for lessons.

The local daily newspaper ran a page-long story on Ren (scant on details but lots of dreamy references to horse-human bonding, as I’ve come to expect from local reporting on this subject) which you can read here.