China’s next generation of riders was in action in Shijiazhuang recently for round three of a seven-team league featuring riders and clubs from Beijing, Tianjin and Shijiazhuang –the three cities which will eventually be merged in one big conurbation according to government plans.

The teenagers rode over noticeably low obstacles during the two day competition at the Hebei An Na Bei La Equestrian Academy (which also uses the English name Anna Bella) which trades in horses as well as teaching the local well to do how to ride.

As is usually the case at these events the catering and on site facilities were top class, with receptionists in white gowns manning marquee tents. The China Equestrian Association, which officiated, told the prize recipient of China’s “strategic goal” of winning more medals at the Olympics. No pressure then.

She has 850,000 followers on Weibo, that makes Jiao Yu Jiao a veritable influencer in the China internet marketing world. The 21 year old, a member of the Chinese showjumping team, clearly plays a canny game. She’s featured on a Weibo platform for “fine goods” and has a partnership with the jewelry brand Longines.
Equestrian sports have long had much cachet for marketing firms in China -hence big city clubs like Equuleus in Beijing have a minor revenue stream from hosting fashion photo shoots. 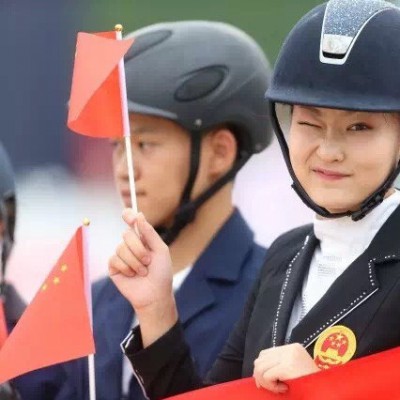 China’s next generation of riders was in action in Shijiazhuang recently for round three of a seven-team league featuring riders and clubs from Beijing, Tianjin and Shijiazhuang –the three cities which will eventually be merged in one big conurbation according to government plans.

The teenagers rode over noticeably low obstacles during the two day competition at the Hebei An Na Bei La Equestrian Academy (which also uses the English name Anna Bella) which trades in horses as well as teaching the local well to do how to ride.

As is usually the case at these events the catering and on site facilities were top class, with receptionists in white gowns manning marquee tents. The China Equestrian Association, which officiated, told the prize recipient of China’s “strategic goal” of winning more medals at the Olympics. No pressure then.

‘CHF2015,’ China’s horse industry expo has been under way at the expo hall near Beijing airport this past two days. Incredibly this is the second such show in as many months –there’s also one in Guangzhou. Organisers say 150 exhibitors at the show include vendors of horses as well as horse feeds, medicines and overseas training schools for horse riders.

The show is co-organised by Tarsus, a British based company, and while the 150 figure may be over-stated the expo has kept going since 2011, with the other exhibition, titled ‘HORFA,’ also happening in Shanghai in the past month.

I am happy to see the official after-party was held in Equuleus Club (www.equriding.com) not too far from the expo halls. The transformation of this club since I started to ride there in 2003 has been phenomenal.

It’s more a lifestyle concept –a conference room and catering space are designed with the corporate functions and fashion shoots which frequent the club. And the auto advertising in the indoor arena is pitched at well-heeled punters who come here. Compared to a European establishment there’s an emphasis on human comforts moreso than on the progeny of the horses – and this is very much the trend at most of the Chinese equestrian clubs I’ve visited.

Watching a documentary about Sino-British evening champ Hua Tian on the website of Phoenix TV (China’s sole privately owned channel) last night I got to thinking what a perfect mix of talent and real estate money, big brands and private schools (all the must-haves of wealthy Chinese) this Chinese equestrian star represents. And yet the Hua camp appears to struggle to pay international competing at an international level.

Currently preparing for a few big upcoming events (the Asian Games in Korea, but first he’s at the World Equestrian Games in France) and the 2016 Olympics Hua also appeared recently in the Beijing Tatler magazine where he was described variously as China’s ‘dressage king’ and ‘equestrian knight’.

Not surprisingly the magazine (a favourite of luxury-brand advertisers and consumers) focused on his schooling at Eton (brand name education is another preoccupation of China’s wealthy) and his ethnicity (Hua rides for China having dropped his British nationality to ride for China at the 2008 Olympics. His father’s from Beijing, his mother is British. But Hua earns fees as a brand ambassador in China for Visit Britain and for posh suit maker Gieves & Hawkes – which like most brands crave acceptance and sales in China.

Yet what isn’t much focused on in the Chinese media is the Hua Tian stable. Jiang Fengcan, a friend and fellow property developer, put up the EUR1.5 million that paid for the horses and training that Hua Tian needed to compete at the 2008 Olympics. Yet Hua Tian says he couldn’t ride at the World Equestrian Games in 2010 because of lack of sponsorship. Likewise he couldn’t make the London Olympics because of lack of fit horses – and sponsorship.

Given he’s a marketing dream for brands seeking sales in China (a photo spread he did in the Chinese edition of Sports Illustrated in the run up to the London Olympics appeared to be sponsored by Land Rover, a favourite car of China’s nouveau riche) it’s puzzling why Hua appears to be struggling to afford international competitions.

A comment from Alex (Hua’s English name) for a Gieves & Hawke press release suggests a wealthy upbringing: “My father instilled in me the understanding that it is the heritage and quality of their tailoring that makes Gieves & Hawkes so special,” said Alex. ”While wearing their clothes, one is conscious of following in the footsteps of great men and maintaining a tradition for understated British elegance. I am deeply honoured to represent such a wonderful brand.”

Another youthful Chinese rider, Zhu Meimei, has been praised in the Chinese media as a medal hopeful at the 2016 Games in Rio. That’s of course if she qualifies, but family success in the Chinese real estate sector should ensure that bloodstock purchases won’t be an issue.

It’s truly Chinese style: in most parts of the world horse people meet at horse fairs. In China you meet at a giant air conditioned exhibition hall with stalls where everyone (mostly foreign) shows photos of their wares (horses) while Chinese makers of tack and gear show photos and samples of their wares. Very few horses if any horses appear.

But happy to see that the equestrian expo set for early May in Guangzhou – it’ll be held in the same venue as the Canton Fair- will feature a recruitment zone. So if you’re looking for a job in the Chinese equestrian scene, better come here.

Most Chinese clubs tend to spend on their money on fancy clubhouses and then spend little or nothing on skilling their staff or hiring in outside experts. It’ll be interesting to see that change.

Well done to Zhou Xinjie, recently elected chair of the new Jinnan Equestrian Association. A business leader in the province of Shandong, Zhou rolled RMB2 million in the Shandong Ai Ma Ren (Horse Loving People) Equestrian Club (aimaren.com.cn) near Jinan Airport. The local government (Communist Party) top brass showed up for the launch of the association in this city on the southeast coast: after the officials read some blessings and advice for the new organisaiton, a democratic election of board officers was held. 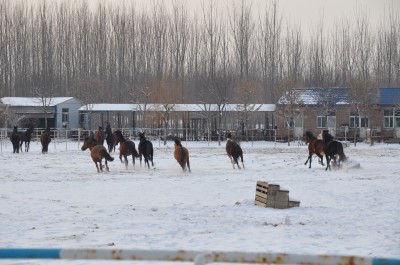 Zhou’s club is located in Yu LongWan EcoZone. I love how China’s wealthy stress about getting out of the traffic-choked city to purer pastures, without any recognition that humongous traffic jams here might be somewhat of their own making. Well, when they roll their BMWs and Porsches out to the pristine green hills of Yu Long Wan there may be more room for Jinan’s buses and bikes to move. Again, though congrats to Mr Zhou on his election.


Cashing in on Chinese Equestianism

Nice money if you can get it: those nice folks at www.horse.org.cn are selling a White Paper on Chinese equestrianism for $1000 apiece. They didn’t bother getting a native speaker to proof the document – hence the spelling mistakes and Chinglish. But you get the contact details for 500 equestrian clubs in China if you spend an extra $1000.

Those who like the White Paper can purchase a banner advert on the website for EUR6,000 – valid for a year, I assume.

There’s obviously money to be made, given an American operation called Sai Ma is currently working hard to sign a deal with the Chinese Equestrian Association to be the state-supervised body’s advertising agent. Expect feverish competition for the Rolex and Land Rover ads.

Did anyone mention horse welfare?